Buffalo's Catholic heritage remains visible from nearly every street corner on Buffalo's Eastside - steeples and buildings everywhere you go. Much of this is now ''hollowed out" and slipping further and further from our grasp. Yet, never were the numbers so great as during the centennial celebrations 59 years ago this week. The series of photographs below are from a book that I recently found and just finished reading, Buffalo's Centennial Eucharistic Congress - September 22-25, 1947. Many of the shots - include images of buildings that are still around and some that have slipped away. 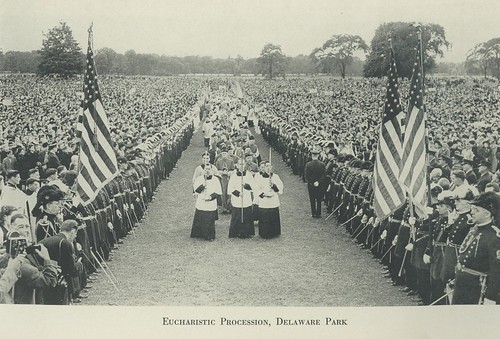 According to John Boccio of the Buffalo News -

Nearly 40,000 parochial school children and Catholic youth, the greatest throng ever to attend a religious event in Buffalo, to-day jammed the Civic Stadium for the second pontifical Mass of the Buffalo Centennial Eucharistic Congress.

Later that afternoon another report describes how 10,000 catholic students marched to Memorial Auditorium from Civic Stadium - the rock pile. And not to be outdone, the next day's events brought this report from James R. Cleary in the Buffalo Courier-Express,

The largest Crowd ever assembled in the history of Buffalo, approximately 200,000, thronged the meadow of Delaware Park yesterday afternoon to offer final adoration to the Holy Eucharist and bring to a close the Buffalo Eucharistic Congress.

Some church buildings have become mosques, others are no longer with us and some - if Bishop Kmiec stays the course, will close forever in the second round of Church closings scheduled to begin early next year. And like magic and despite a slew of empty buildings, new ones - like this McChurch, get built. I've been covering various aspects of this story, here in Annals of Neglect.

Dalai, next time you're around I'd like to show you the meadow in Delaware Park. Holds more people than that spot out in Amherst. I think you'd like it. It's in the middle of our City. Beautiful, too.