Talking with Sean and friends recently I was introduced to the work of Camilo José Vergara, photographer, and author of How the Other Half Worships (2005) among numerous other titles that I mentioned last week. 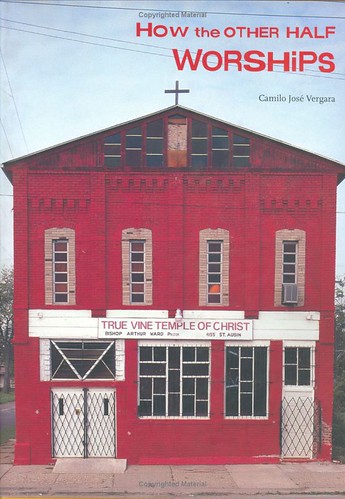 Interested? Make sure to check out Vergara's site - Invincible Cities. Here, you learn about his efforts to document the American ghetto in the same way the FSA photographers captured various aspects of the cultural landscape 70 years ago. Those images - right here - from the Library of Congress and the American Memory Collection provide an important link to Vergara's short essay which is a rich introduction into his thinking and work.

Vergara presented some of his Invincible Cities findings during ReConceptualizing the Built Environment, a conference at Harvard University last year. His Images as a Tool of Discovery contains an abstract and full-length text of his contribution to that conference. And learned that the name Invincible Cities, it's borrowed from the poet Walt Whitman.

Buffalo's own Milton Rogovin started documenting Buffalo's east side storefront churches circa 1960, churches which already existed at what we now look back on as the high point of population and wealth in Buffalo, when the Catholic Diocese had yet to imagine that it would ever have to close a parish.