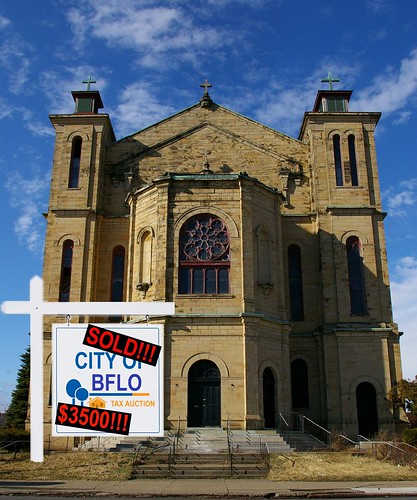 Michele Johnson and I were comparing notes during the weeks and final days leading up to last October's City in rem sale, the auction. We poured over the list and never saw this. A month after the sale I posted City Sale which contains a spreadsheet documenting the sale's results. Sure enough, on the last day of the sale two guys from Williamsville, NY bought 1066 East Ferry Street, aka St. Matthew's. (Click through the spreadsheet to find their names, which I won't mention here...) One of these guys sent me an email the other day and identified himself as one of the owners of Re/Deal Partners LLC, the new owner of St. Matthew's. Same guy informed me that the deed was just filed by the City last Friday and he doesn't want to start any work at St. Matthew's 'till he gets the deed in the mail.

So...lots of issues here I know. Both St. Matthew's and Transfiguration were part of the same Diocesan deaccession plan back in the '90s. You'll remember that Transfiguration was sold for $7000 and now we see that empty churches continue to lose value.

Guy claimed no knowledge of the May 4th Housing Court date. I've spoken to the City's inspector who filed the Housing Court case. I've given him names and addresses that the purchaser provided the City last October as the successful bidder. Re/Deal Partners LLC has a different address which I've also handed over to the inspector. On May 4th I'll make certain to hand both addresses to Judge Nowak, too.

At this rate when the Bishop announces Diocesan Deaccession - Part II, guess you know what Selling Jesus is going to cost.

One window from this place will fetch more than the purchase price of the entire building. I don't know what their plans are but reselling the building's artifacts would not be out of the real of possibility.

Most of the stained glass, moldings etc were already removed. Really the only "artifacts" left are the 4 ft statues that line the ceiling about 30ft up.

I also bought a property from the last in-rem auction. I thought I had it bad with the city taking until around Feb 15 to file the deed. I though 4 months was insulting but I guess it could have been 7.
This was a nightmare, as one isn't allowed to secure the property until they do so. Brilliant timing with the auction happening in Oct, and these properties being stranded through another Buffalo winter with no stabilization being allowed by the new owners.
New Roof, $22000.
Additonal waterdamage throughout house due to completely incompetant deed filing system, priceless.

NO one is going to challenge you if you decide to actually take possession of the property prior to the deed transfer.

Generally once the property hits the in-rem sale its in pretty rough shape and neighbors usually appreciate the securing of the site...

That said...really hope these guys do the right thing and secure the place.

I hope these guys have more than "good intentions". I'd hate to see another Transfiguration. Is St Matthews on the national register of historic places? It would be nice to know that the building doesn't get stripped of it's remaining artifacts - how little may be left.
I could of swarn I saw some intact stained glass the last time I drove by...a couple weeks ago. Am I mistaken?

David Serota & Scott Weinstein of Wmsville & Clarence bid $3500 on 1066 E Ferry at the October auction, but I cannot find any deed filed.

Wonder what there plans are?

As per your headline, Jesus is apparently for sale for the modern equivalent of 30 pieces of silver.

I love reading these comments, especially since you all seem to have a very good knowledge of the church. That's why I'm so shocked that none of you have seen it posted on ebay TWICE. It's on there now, just search real estate for "church". Buy-it-now for $80k, so I guess you know what the guys are planning on doing with the church....I'd love to buy it and live in it, but I think it's too far gone for an amateur handyman that has a real day job. I live in Califonia and I'm looking to move east and buy something "different". Anyone think this would be a total waste of money. Or should I wait for the next city auction and get a really good deal?

Thanks for checking in...just looked all over ebay and can not find the listing.

Please post the ebay auction # you are referring to...thanks.

My names Lisa and i was intrested in the church aswell only after seeing it on ebay for 80,000. Can't believe they bought it for only 3500, and are selling a Church non the less for that high of a mark up...unbelievable.. Also kind of frustrating to hear that you would be purchasing the church with alot of the original artifacts missing??? hmmm

You can keep any property in Buffalo.

It is a RAT HOLE.

Everyone wants to make a name for himself and a example of anyone who stupidly buys in the city.

Yes all the glass is worth more money so then buy it. They will crucify you in a heartbeat. They will claim you are destroying the neigborhood, stealing the historic windows and scamming any tenant that mores in.


Buffalo is COSED FOR BUSINESS and BRYON BROWN WILL LOSE NEXT YEAR. Just ask Steve casey..

About the mark up..sure they are going to mark it up that much, one of them is a JEW!