While searching the WNY Heritage Press site recently for old Buffalo pics, I found this short article chronicling a new city initiative when Buffalo was poor and jobs were scarce - urban farming! Here's the link - The Depression of 1893-1897 Buffalo's Urban Farms.

In 1895, Mayor Edgar Boardman Jewett, newly elected mayor of Buffalo, proposed that Buffalo follow the example Detroit which had utilized vacant land in the city for use by poor people as farms. The city would solicit the loan of such land from landowners, prepare the fields by having them plowed, and provide the seeds. 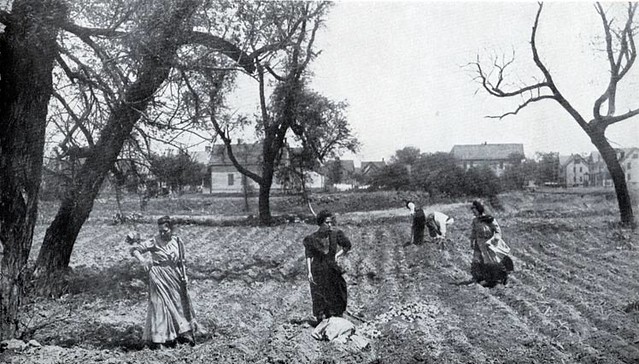 During the depression in 1893 Mayor Pingree of Detroit was nationally known for his reformist policies.

Pingree expanded the public welfare programs, initiated public works for the unemployed, built new schools, parks, and public baths. He gained national recognition through his "potato patch plan," a systematic use of vacant city land for gardens which would produce food for the city's poor.

Today Detroit is the country's poorest city. In Michigan, elected officials on a state and local level now embrace what was widely successful over a hundred years ago - see, Farm Report - From Detroit. The issues swirling around poverty and food security in Buffalo - the country's third poorest city - are just as severe and the human impact is just as acute. Buffalo followed Detroit's public policy success in 1893. Why not in 2009?

Let's not forget that in 1900, the site chosen for the Pan American Exposition was farmland. And that is when Buffalo was the nation's 8th largest city.

Thanks to a heads-up from Cynthia, I researched this a bit when I was doing the Garden Walk book. Indigent folks were allowed to tend plots on city land.

Urban farming is empowering and creates a sense of community. I'd love to see more of this in the city!

i read that the east side of buffalo had a lot of small farms when it was first being settled by german immigrants. the land was cheaper, and it was still close enough for the head of household to work in the city, which at the time was more concentrated on the waterfront. now with the demolition of houses, particularly on the east side, land is opening up again. i thought that alone was interesting historical symmetry in favor of urban farming, and now you bring this to light! in the most wonderful way, there really are no new ideas ;o)

Given the veggie garden initiative in the WhiteHouse, there's no reason why we can't have urban farms in Buffalo too.
The city should just let the people set up vegetable gardens in the vacant lots. At least someone will take care of the land!

These pictures depict what parts of Buffalo's east side are back to today!

Imagine the heat in those fields! In those late 19th century days, wearing shorts was considered indecent for all adults, both men and women.

And it is for sure that those women also were required to wear petticoats under those long skirts--then after farming under the hot sun, they had to go home and handwash all the clothes--and their kids' clothes too--pheeewwwwww!

Those potato sacks were probably made of hemp--hemp is marajuana fibers.

I remember such sacks in the '40s; scratchy and itchy...

Oops. My grandparents would have been small children or still twinkles in their parents' eyes in that time period...

Keep in mind that the time period of the adults in these pictures was pre-welfare. Changing their families' conditions of indigence into prosperity, or at least a livable condition of financial security for themselves and their children, was absolutely ingrained.

Also in that time period, there were no burbs. The consistantly outward moving city lines were about where Jefferson to Fillmore Avenues are and the rest was farmland!