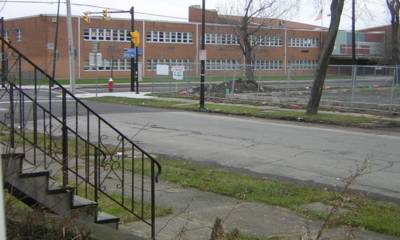 New Home for the Buffalo Academy for Visual & Performing Arts

This is the view, January 1, 2005, from the Woodlawn Row Houses facing the entrance to the newly relocated Buffalo Academy for the Visual & Performing Arts on Masten Avenue. Buffalo Traditional is moving to a recently renovated spot on Northampton Street, the old East High School. The complete(?) story about Buffalo's Joint School Construction Project can be found here, I guess. The new Buffalo Traditional High School, or the old East High School is part of the Phase I of this building project. Phase II and III have some unspecified connection to the Buffalo Fiscal Control Board and the fact that we do not have a Superintendent of Schools.

The Woodlawn Row Houses are one of 13 abandoned, derelict or boarded buildings located within one block of the Buffalo Academy for the Visual & Performing Arts. This is not a unique situation in this neighborhood. There are an additional 70 derelict and vacant buildings in the 25 block neighborhood between Main/Jefferson & Ferry/Utica. Eight of these abandonded, derelict or boarded houses are located along the Michigan & Utica Avenue walking route between Performing Arts and the NFTA stop that many of the students use at Utica & Main. Crime and assault are frequently associated with vacant & boarded houses here on the East side.

While looking for official news of this move, I searched the city’s site and found that only two of the 21 city high school’s have active websites. Four of the high schools had dead aol links on the city’s website. Does anyone downtown monitor the website? If I were moving to . If your child attended one of these schools, would you wonder why the school doesn’t have a website, that works? Maybe my expectations are too high.

Finally, I’m sure Principal Kevin Kazmierczak will be interested in the safety of his students and might be helpful in holding the city accountable for this property they own. If anyone knows members of the Parents Group at for the Visual & Performing Arts, please let me know.

...via Buffalo Alerts -- Hank Bromley a BAVPA parent has just informed me that the move might not happen. The move is still a long ways off, and in fact it may never happen. Check this out for the most recent update about the game the might be called "musical chairs!"

In the same e-mail from Hank, I learn that Chris Byrd is head of BAVPA alumni association and Drew Kelley is head of the PTO. Incidentally, Chris runs the phenomenally successful In Da Buff, Naked Words from the Naked City!

Read all about the Joint Schools Construction Project and the news regarding BAVPA's move, here.