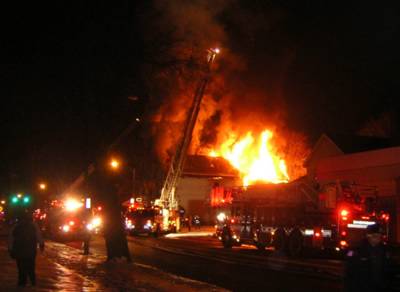 Early Saturday morning I noticed the familiar red lights. When I heard the sirens, I looked out my office window and saw flames shooting from a vacant house one block away. The fire destroyed this two-family house at . Neighbors told me a man passed away two summers ago who had lived there from the west-nile virus. I am left wondering how a house in the middle of winter can spontaneously erupt into a ball of flames. No utilities on....Hmmm…

Sunday afternoon I was out for a walk and took these two pictures - front photo and side photo - of what was left of . Not satisfied with the view, I wanted to see the full extent of the damage. I walked thru an empty lot off . It's next to the Simmons Funeral Home. There I noticed the house at 76 East which has been boarded, derelict and vacant for three years is wide open in the back. Here’s the photo of the front of the house and here’s what the back of the house looks like.

Not good, if you are student walking from the Main/Utica station down and up to school at , just two blocks away. This is the way most students get to school here in my neighborhood. What about your neighborhood? Send me pics or get me the addresses of boarded, derelict and vacant houses near Buffalo Schools. I’ll ask School Board Member Chris Jacobs to place this student safety issue on the next BOE meeting.

I had an opportunity to have a long talk with my neighbor Charles Simmons about houses and crime in the neighborhood. His funeral business is doing well on yet he remains very concerned about the safety of people attending services. He is livid with the condition of the property next to his funeral home - 76 East Utica - and according to Mr. Simmons promises by Councilman Antoine Thomspson, Masten Council Member, that the house would be demolished soon, remain just that promises. According to Mr. Simmons, Antoine promised to have the house down, two years ago!

Since Antoine made that promise there have been other fires. This is , one short block away from . That was July. When I met with Building Inspector Mike Muscarella at the corner of Woodlawn and Monday afternoon, I took this picture of .

My childhood is full of memories of walking and riding my bike to school. I’m wondering what sort of memories Buffalo Traditional High School students are going to have in 10-15 years of dodging charred vinyl siding and staying alert because they know there could be danger in the these houses that are abandoned, derelict and vacant. Think that these daily images might contribute to a sense of despair here in Loserville? If they are highly motivated learners, do you think they will want to return once they finish college?

Here are a few other examples of houses left to rot along the route most students from Buffalo Traditional take to get to school. The most glaring example of neglect is the city owned property 147-153 Woodlawn, which is diagonally across from the main entrance to Buffalo Traditional. Others include:

There, nine houses wide open. Now, I am not suggesting there are stockpiles of WMD’s in any of these houses. Yet wouldn’t common sense lead one to believe that these houses, in their current condition, pose an “imminent danger” to the students who attend Buffalo Traditional and to the heath and safety of neighborhood residents. The three large houses on appear to be in structurally sound condition. Based on my experience, with a decent plan, these three houses could be easily renovated and restored as two-family or large single family homes. Just some imagination...demolition is not required!

Housing inspectors have an important job to do, yet I was amazed this afternoon talking with Inspector Mike Muscarella here on the street, he was surprised to learn that there isn’t a file on the 3rd floor for .

I’ll be on the phone with Lou Petrucci in the morning. I'll contact Drew Kelley, head of the PTO at BAVPA, too. And don't forget to send me shots or tip me off about vacant, derelict and boarded houses that are located a few blocks away from a school.

Here’s a late afternoon shot of what’s left of , 36 hours after the devastating fire. Progress!!!

Posted by fixBuffalo at 1:29 AM