Salem Evangelical: In the 'hood and off the radar

The Salem Evangelical Reformed Church, located at 413 Sherman Street, was designed by Buffalo architect Jacob Oberkircher and built in 1907 (google map).  Oberkircher's church replaced this wooden chapel that established this German congregation in the neighborhood in 1873.  Fast forward 100 years.  The pattern is familiar.  Like with many of the East Side's heritage religious structures the people who worshiped here left long ago and the minister who lead the congregation can not be located. 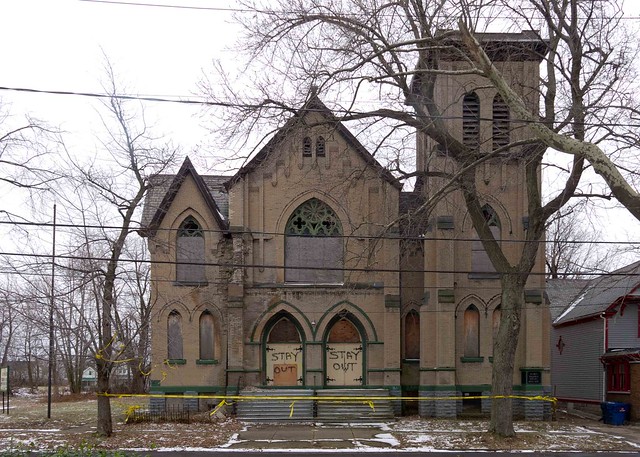 Salem has been on my radar for a number of years.  Last year I ventured inside, following a well-worn scrapper's path.  I was awed.  There wasn't one piece of broken or missing stained glass.  The pews were mostly intact and the bell could still be rung with a rope that was strung to the tower.  Records kept by the original German congregation were still on the shelves next to hymnals and various historical records probably belonging to members of the original congregation.  Now, the series of pics - individually or as a slideshow - show a new story.  The stained glass is now missing, the pews are in disarray and parts of the brick facade are crumbling in multiple locations. 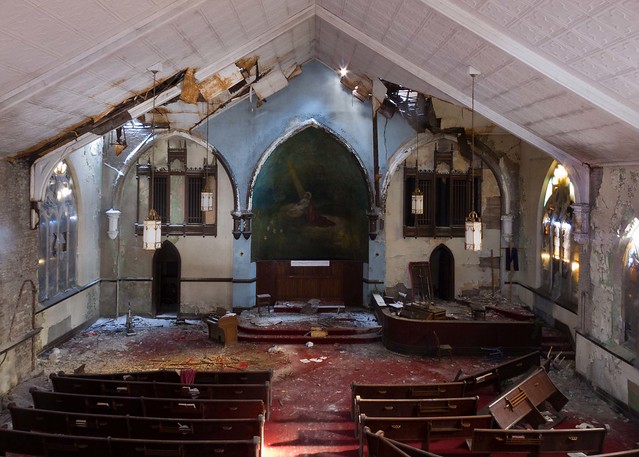 I stopped by City Hall the other day and sat down with Ellicott District Councilman Darius Pridgen to talk about this church.  I told him about the multiple entry ways. I told him about the missing stained glass and the crumbling tapestry behind what's left of the altar.  Three days later all the entrances were boarded.  Yesterday the front door was open.

I've been told by neighbors that Sunrise Congregation - the current owner of record - could no longer afford to heat the church, so services were held in the former minister's residence,  adjacent to the church. That residence was demolished three years ago.  I haven't heard yet, who paid for that demolition. 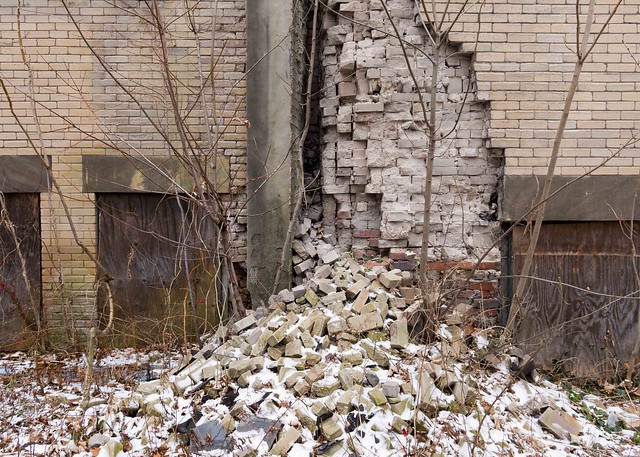 If there's an inventory of threatened religious structures in Buffalo, Salem needs to be added to the list.  The roof will continue to fail.  Bricks will continue to fall.  Much like the "demolition by neglect" of Christ Evangelical Luthern Church at the corner of Broadway and Fox (2005) or the collapse of the school building at Sacred Heart on Emslie (2008), near Clinton - Salem Church is likely to meet the same fate.  Soon.

Additional historical images: view as a set/individually or as a slideshow.

This is so sad.

I used to live in Buffalo, when I was pursing my BS and MA at UB (and I read and shared your blog accordingly). I'm doing doctoral work in sociology at the University of Washington now.

Last week my sections (I am a teaching assistant) had read Antigone as a case of where the law can interfere with, or interact with ideas of the sacred.

So, thank you for your work!

This gave me an idea. I'm sure there are many sort-of expats, expats, and current residents like you that care. Together we could all put small amounts of funds together/help raise money to help these structures. I wish there was a site to do this through- like Kickstarter- microfunding a project. Obviously, there would have to be someone who wanted the property or would be willing to rehabilitate it. Perhaps it can be led through this blog. David, what do you think about this idea?

you wrote: Records kept by the original German congregation were still on the shelves next to hymnals in various historical records probably belonging to members of the original congregation.

my reply: records are easiest to save? and the relatives of that original congregation would want them saved?

you also wrote: no inventory of churches in need of renovation.
my reply: again, inventory lists
can be pretty powerful tools.

roofs -- best place to start when saving a bldg? you get the roof fixed and you stop the big damage. just a suggestion. I'm not a construction person.

Anonymous,
You make what would appear to be rational statements but “rational” does not apply to the east side of Buffalo.

Here we have a unique German church that must have served the German community for 50-60 years and then abandoned by the descendants who left to seek-out better opportunities.

The demographics have changed throughout East Buffalo and the replacement of former German and Polish immigrants of these areas could not give a rats-ass about the history of this area or, much less, this former church.

Buildings, such as this, should be retained as an anchor for the neighborhood but the HOOD could care less – if this building was converted into a crack house, maybe the local residents would appreciate it more…

Every Easter I have a good laugh when I see the Broadway Market filled to capacity with Caucasians proclaiming their fond memories of growing-up in the area or visiting their grandparents in this area and I always think: “If you’re so damn proud of your heritage and its link to East Buffalo, why the hell don’t you move back or just move into the area and take back the neighborhood from the damn HOOD?”

A quick check at City Hall has revealed the building recently sold at the In-Rem foreclosure auction for $1000 to Kabir Mohammed. He is listed at 200 East Seventh Street, Brooklyn NY 11218. Perhaps anyone with contacts in Brooklyn can try to get a hold of him

Anon 2:41 - Thanks for the update. If any fixBuffalo readers live in Brooklyn's Prospect Park neighborhoods, desire to knock on Kabir's door and ask about his plans for the church - go at it. Email me with what you find out - davidtorke@gmail.com

The deed listing Kabir Mohammed as the new owner of 413 Sherman was filed by the CIty on December 6, 2011.

I am going to have Mary Holland from the Buffalo Religious Arts Center contact you. At a meeting with her this morning, we talked about this church and I sent her along some photos I took of it last year and your post.

That's a shame the original church records/registers were not pulled out. If not larger (national) church body claims a connection to the original congregation, Buffalo Historical Society Library would be a good place to deposit these.

Not a big deal but the photo links to Christ Lutheran are to pics of Christ Lutheran's former parish hall. The actual church had been demolished following the break-in and fire in 1990. (Former member of Christ Lutheran, I went in and took some photos of the stained glass the morning the fire was put out).